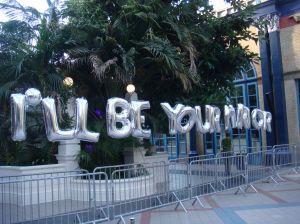 Portishead curated the ATP festival I’ll Be Your Mirror on weekend of July 23-24 at Alexandra Palace (festival happening just 2 train stops away from me…I’m there!)

Armed with my Sunday ticket, saw the day’s opening act Godspeed You! Black Emperor kick off in fine form with Hope Drone. Basically, its 8 musicians, seated in a circle playing an epic, atmospheric 2 hour set, in an almost pitch black venue, with black & white film footage behind them to add to the mood. They got back together in 2010 after a long hiatus, so I was looking forward to finally catching them live! It was a mesmerizing performance ( though I have to admit drifting off a little bit, halfway through, but they quickly reeled me back when they played music from Lift Yr. Skinny Fists Like Antennas to Heaven!)

After that explored the venue’s silver-streamers decorated panorama room and cinema, before heading out enjoy the rare sunny summer day in London.

Having soaked up the afternoon sun, and with food and beer in my belly to last me the night, I went to the Grand Hall to see the mighty Swans. 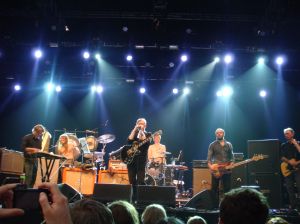 Seen these guys play at Koko last year. It was a different performance this time… less ‘consistent’ than at Koko but heavier. The songs have evolved since the last time and they were noticeably heavier (always a good thing for me), honing in on the frequencies that rattles your torso, when drummer pounds the heavy toms in unison with bassist picking off that low open note. M. Gira’s stage persona was like a preacher at Koko, while at this gig, he was like a man possessed, kneeling and spitting, slapping himself and dancing like a mad man.

Next up, Nick Cave’s Grinderman. It was like a Nick Cave and the Bad Seeds show, just minus a few of the Bad Seeds. I like the 2 Grinderman albums and the set kicked-off really well with Mickey Mouse and the Goodbye Man, but the energy sort of fizzled out towards the end. 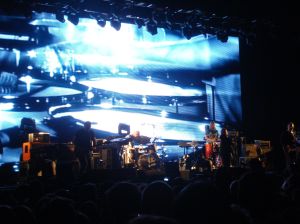 Last up, Portishead. And they were nothing short of sublime. Starts off with the beautiful Silence. The slightly stripped down version of Wandering Star was lovely. There was a minor hitch, where drummer Clive kept missing the cue to come in on Chase The Tear (they tried 4 times!) , so they had to skip to the next song (guess insanely good drummers also have bad days!). Bigger disappointment was they didn’t play All Mine. But that’s just a small let-down in an otherwise fantastic performance! It was a fine way to end my first ATP festival…definitely won’t be my last.